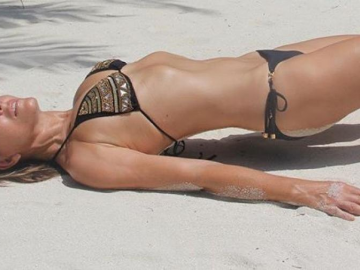 The UK has given us so many beautiful and talented women in the entertainment industry for many years now and there will no doubt be plenty more to make the break through for many more years to come. While there have been some people who have come through on the acting scene over the years, making a name for themselves before then struggling to land another big role and ultimately falling away from the business, there are plenty who have been working in the acting industry for many years now and still have a big following of fans all over the world.

Which brings us to the stunningly beautiful English babe Elizabeth Hurley, who has been working in the acting game for decades now and, despite the fact that she is now well into her 50s, she is still one of the hottest women on the face of the Earth. Elizabeth is still dabbling in acting and has appeared in a handful of movies over the years but she has stuck mainly to television and her role in the hit series The Royals. Here we are going to show you just why we want to see more of Elizabeth Hurely on the big screen. Enjoy! 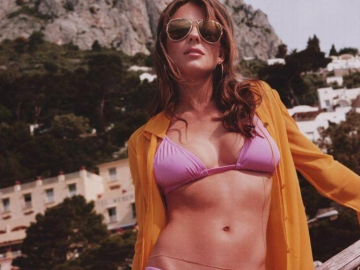 Elizabeth Hurley shows why she is the hottest 52-year-old on the planet
25th May 2018 @ 08:19pm
Elizabeth Hurley is 52 years old and loves to show off her body but who could blame her

21 reasons why we want more of Elizabeth Hurley on the big screen
15th March 2018 @ 10:13am
The UK has given us so many beautiful and talented women in the entertainment industry for many years now and there will no doubt be plenty more to make ...

Fans amazed by Elizabeth Hurley's sexy body at 52
12th January 2018 @ 06:37am
Elizabeth Hurley might be 52 years old but there is no denying how hot her body still is

18 Reasons why Elizabeth Hurley's body continues to blow our mind
28th December 2017 @ 09:37am
Despite the fact that we are getting so many young and beautiful women coming through on the entertain industry scene all the time, there are still plen ...

27 British babes with bodies to die for
18th December 2017 @ 05:27am
While we would all love to believe that the more talented you are at your craft, the more successful you will be, that is not necessarily the case, espe ...

18 Hot Women in Their 50s Showing Age is Just a Number
26th September 2017 @ 11:18am
There are so many young and beautiful women coming through in the entertainment industry all the time, which does seem to put a lot of pressure on the o ...

Elizabeth Hurley discusses her 50th birthday plans
22nd March 2015 @ 08:29pm
British actress Elizabeth Hurley turns 50 this year and she has been talking about her big plans

Elizabeth Hurley gets off the mat and re-energizes career with "The Royals"
4th February 2015 @ 12:25pm
Elizabeth Hurley's impressive performance as one of the stars of "The Royals" has some entertainment observers thinking career rejuvenation for the actr ...

Elizabeth Hurley looks great in purple blouse after "Viktor" box office bomb
25th November 2014 @ 04:45am
Elizabeth Hurley's most recent film was a disaster at the box office but the English star still made a shining appearance when she went out on Friday ni ...